Information-wave technology of Peter Garyaev is a system of directed action, tuned to healing by transmitting quantum information to eliminate problems , related to health. Based on the properties of cosmic accumulation, biological energy, Reich Principle, reflected emissions of Kozyrev mirrors. Linguistic-wave genetics of Garyaev allows to achieve a targeted impact on various human pathologies. 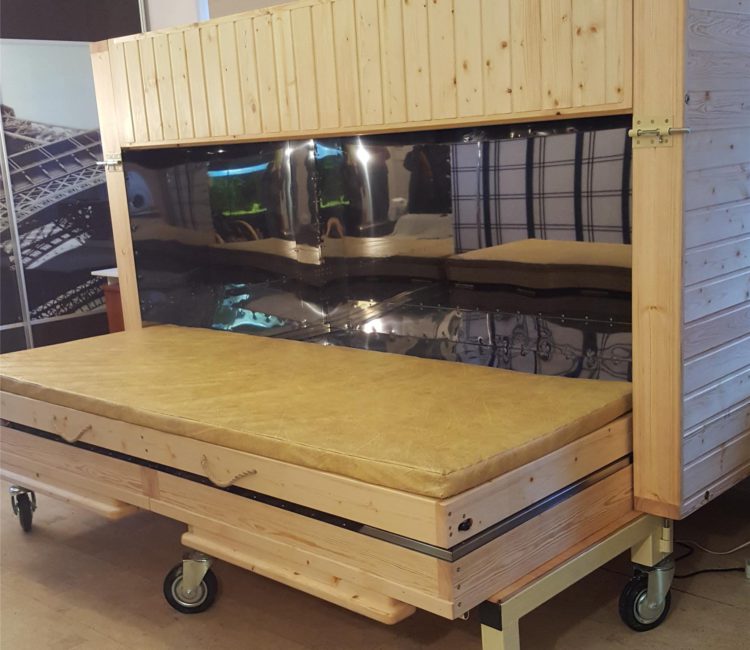 The capsule affects the processes of self-regulation by changing the information field of cells and tissues, organs at the quantum level, which has no analogues in modern medicine.
Generating a sound field in a safe frequency range for living organisms, the capsule programs the human body for recovery, thereby normalizing his condition.

Wave genetics treatment is totally harmless, comfortable method, both to heal the body, as well as decease prevention. During the sessions in the information capsule, a number of diseases disappear, the body is cleansing . Usually we advise you to go through a series of sessions, after a while to repeat them. To achieve the greatest effect, we recommend at the same time listening to programs-matrix Garjaeva. 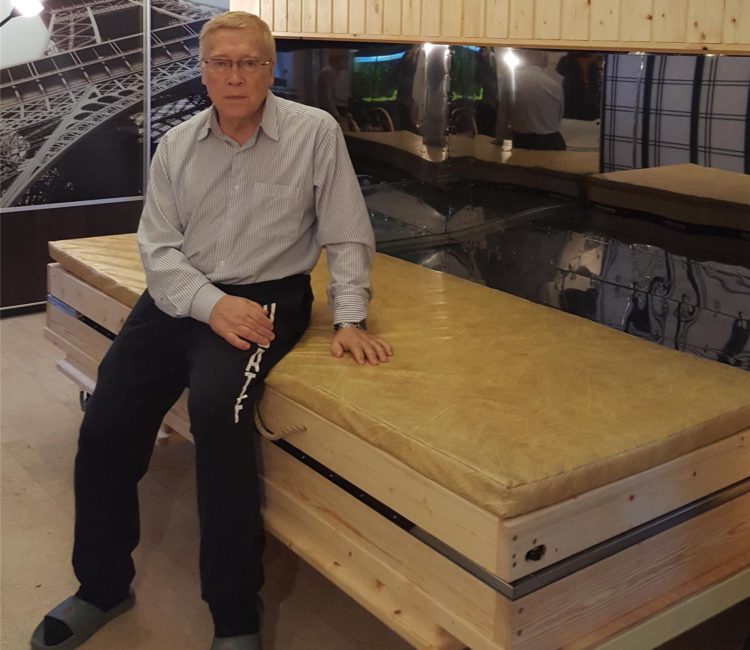 Therapeutic sessions of wave exposure become indispensable in the fight against various ailments. In cases of ineffectiveness of medical recommendations, our therapy is an alternative way to treat many diseases.. Capsule therapy boosts immunity, chronic fatigue syndrome disappears, renewal occurs, rejuvenation of the body increases efficiency, and endurance.

Getting the body out of stress, depression, panic attacks using Garyaev matrices and capsules.

Mantsev AY., consultant on functional training of athletes, specialist in the diagnosis of heart rate variability.

Stress (by angl.stress – load, voltage; state overvoltage) – a set of nonspecific adaptive (normal) reactions of the body to the influence of various adverse factors- stressors (physical or psychological), disturbing homeostasis, as well as the corresponding state of the nervous system or the organism as a whole. Whatever stress are, "Good" or "Bad", emotional or physical, its influence on the body has a general non-specific features. Stress is a non-specific basis for many diseases including autoimmune. Constantly arriving weak negative stimuli are overcome by continuous adaptation.. The effect of stimuli is to awaken the adaptation system and bring it into a state of readiness for a faster and more effective response.. Stronger stimuli may require greater expenditure of adaptive energy, than it is produced; then the adaptation reserve is put into action, and if it is used up, the death occurs.

Goldstone axiom . Adaptive energy can be produced, although its production decreases in old age, it can also be retained in the form of adaptation capital, although the capacity for this capital is limited. If the body spends its adaptive energy faster, than produces, it spends its reserve (adaptation capital) and dies when completely depleted it. Distress- a negative type of stress, which the body cannot cope with. It undermines human health and leads to serious diseases.. The immune system suffers from stress. In a stressful state, people are more likely to fall victim to infections, because the production of immune cells drops markedly during periods of physical or mental stress. During stress, the emotional reaction develops before other responses, activating the autonomic nervous system and its endocrine supply.

There is a tendency among non-specialists to identify stress ( especially psychological) just with nervous tension. However, stress- not just the anxiety or nervous tension, but rather - universal physiological response to sufficiently strong exposure, it has the described symptoms and phases (from activation of the physiological apparatus to exhaustion).
stress symptoms. Symptoms may gradually increase or appear suddenly. Panic attacks usually last a short time, in the form of emotional explosions with a sense of horror, increased heartbeat and sweating. Two main signs of stress- anxiety and worry. Symptoms also include muscle tension, fatigue, irritability, restlessness, insomnia or sleep disorders, difficulty concentrating. Anxiety can lead to panic attacks, which characterized by a feeling of discomfort or pain in the chest, feeling of lack of air, suffocation, chills, temperature increase, shiver, nausea, abdominal pain, numbness or tingling in the extremities. Further on incremental: headaches, back pain, constipation, diarrhea, blood pressure increase, cardiovascular and autoimmune diseases. External signs are well known to us, but, what happens in the body in physiological terms? Vegetative (autonomous) nervous system of our body, which instantly responds to all stress factors, is composed of two divisions: 1-sympathetic (exciting) and 2-parasympathetic (relaxing). Our condition depends on the balance of these departments.. Excitation is transmitted along the sympathetic nerves and they, like a network, braid the blood arteries and the smallest capillaries, which go to the internal organs and skin. From excitation, these nerves compress the vessels, thus hampering the movement of blood, and with this access of oxygen and nutrients to the cells getting disrupted . As a result, the normal functioning of the organ is disturbed. (organs). This manifests itself in a decrease or, vice versa, increase in the diseased organ function. Various kinds of changes appear on the skin, this is especially true of the fingers and nails of the hands and feet. The limb constantly freeze due to lack of blood supply (narrowed lumens of capillaries). Further, such skin diseases, as psoriasis and various types of dermatitis may appear. Internal organs, such as the stomach, intestines, thyroid, prostate, etc. have smooth muscles, which is innervated by sympathetic fibers. From strong arousal, this muscle ceases to contract normally, in this regard, food stagnation occurs in the intestine, decay processes intensify, flatulence develops, the mucous membrane becomes inflamed from the resulting toxins. This situation can last for years, turning into peptic ulcer disease and leads to surgical intervention. A similar situation with the pancreas. Violation of blood supply- one of the reasons, leading to a malfunction of the cells, producing insulin and to type 1 diabetes. The same happens to the thyroid gland, sweat glands, prostate in men, and the uterus in women. To force sympathetic fibers to "weaken the grip" and increase the lumen in the vessels can only reduce the excitation in them. Another problem is, that parasympathetic nerve fibers are not located on the vessels, they are located next to somatic (mobility) nerve fibers. That means, that first it is necessary to relieve stressful excitement, "Switch off" mechanisms, which lead to vasoconstriction (sympatho-adrenal system), and then transfer the excitation to the parasympathetic fibers, in particular, on the vagus nerve (lat. nervusvagus). Vagus nerve, excited, transfers its momentum to the internal organs, normalizing their functions. Using various kinds of sedatives and antidepressants, it is almost impossible to get such a reaction. Vagus nerve stimulation (VNS) have been used in medicine since 1990 for the treatment of epilepsy. The technique is also effective in the treatment of depression. However, the price of the generator itself, which is sewn under the skin and sends an electrical impulse to the vagus nerve, – costs more than 1 million rubles! And, while using this stimulator, it is necessary to reduce the excitation of sympathetic fibers, activity of a long chain of chemical reactions, occurring in the parts of the brain (The hypothalamus, pituitary gland…), endocrine glands (adrenal glands, thyroid ...). For this, traditional medicine still uses drugs, which very often have side effects. And more importantly, the conventional medicine lacks qualitative and quantitative diagnosis of the most stressful condition, namely balance of the autonomic nervous system. Neurologists in the field do not have modern diagnostic tools, which include, for example, diagnosis of heart rate variability. This technique was developed by a Soviet academician, Parin VV, even before U. Gagarin flyed into space. It was aimed at tracking regulatory processes in the astronaut's body, located in space. With the advent of computers, this technique in the form of a program is quite affordable, and understandable. A huge work in this direction was carried out by the Russian academician Baevsky R.M.. The technique allows in a few minutes to assess qualitatively and quantitatively the balance of sympathetic-parasympathetics (arousal-relaxation), as well as the participation and role of the neurohumoral system in the development of stress reactions in the body.
But only diagnostics does not change anything. It is necessary to have an affordable and operational means of influencing stress. Now, such a tool are linguistic-wave matrices and the capsule of academician Garyaev P.P.. Numerous experiments in Russia and abroad have proved the effectiveness of the method, discovered by P.P. Garyaev. Despite the active resistance of supporters of traditional medicine, Today, Garyaev's method works and brings people relief from ailments.

Using the diagnosis of heart rate variability in SPC Bioquant, created by Garyaev P.P, the balance of the nervous system is quickly determined, then in the special capsule the patient listens to sound programs, carrying encoded information. This information can reach DNA of neurons and astrocytes (brain cells), to which it is intended, or cells and intracellular formations of the organs of our body. After receiving information, changes occur at the level of the nervous system., as well as, according to the experiments conducted, and at the level of blood leukocytes. Their enzymatic activity changes, which allows cells to synthesize and store energy in the form of ATP due to aerobic (in the presence of oxygen) processes. In prolonged stressful situations, the cell increasingly switches to anaerobic synthesis of ATP. (Warburg effect), which leads to a change in the PH of the blood in the direction of acidification. The functions of the autoimmune system are reduced, the adaptive energy reserve is sharply reduced, disturbances in the transmission of information between brain cells occur , that leads to the development of various diseases, including cancer. To stop this process and give the cells of our body the opportunity to live and develop normally allow the capsule and sound matrices of academician P.P. Garyaev.

Examples. a SPC Bioquant patient, a girl of 16 , college student, in a state of severe nervous disorder, with a referral for treatment to a psychoneurological clinic. Diagnosis of heart rate variability showed pronounced excitation of the sympathetic department of the nervous system, pronounced tachycardia (Heart rate 90 beats/min), increase in blood pressure up to 140/90. After 30 minutes of listening to the audio program in the capsule, aimed at correcting the balance of the nervous system, and after re-diagnosis of HRV, it was recorded: normocardia, rhythm disturbance not detected, balance of function of the sympathetic and parasympathetic parts of the nervous system, normalization AD up to 110/70, reduction of heart rate to 62 beats / min. To consolidate the result, it is recommended to undergo this procedure 1 time per week for a month..

Another example. A woman, 43 years, accountant of a large company, asked for a diagnosis of the nervous system. There have been complaints of headaches, fatigue, anxiety . As a result of the diagnosis,: tachycardia, heart rate – 88-90 beats per minute in the supine position, pronounced excitation of the sympathetic department, pronounced decrease in the adaptive energy reserve, AD-150/100. After the first session in the capsule and listening to the nervous system correction program, it was noted: decrease in heart rate to 64 bpm, AD – 120/80, normalization of the balance of the autonomic nervous system, increase of adaptive energy reserve. The patient continues to listen to the program in a capsule 1 time per week. General condition during the working week is good.