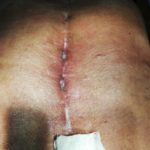 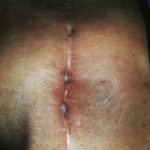 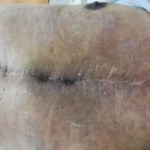 P.S. I dare you to divert more, telling of an interesting case of using ointments miksovogo. The patient in '74, very active even grandfather, and the man. Operation coronary artery bypass surgery has restored his heart, but given the age and diabetes much of his shattered. I even he has developed a new generation of corset, which allowed him to do without the re-operation after sternal nonunion (rather fracture), to alleviate his condition. During 9 months after the operation periodically came from atheromas in projection postoperative scar, and still the sternum and not fused to the end, periodically crunched. When I got the news, ointment, I offered him to try to apply it. Within 2 weeks of use, he came very pleased. All healed atheroma, and fused sternum, we felt it through the skin, She fused irregularly due to its fracture, but he was so relieved, because it was able to move again as if nothing unprecedented, without pain and discomfort. He beekeeper was able to engage himself, without any help their bees. And the most interesting, calls me and says, joyful, I went to the Crimea to his sisters, 5000 km by car 74 years, like a boy, roundtrip. 3-4 last month after his cure, He now comes to me just to say hello and bring your delicious honey!!!