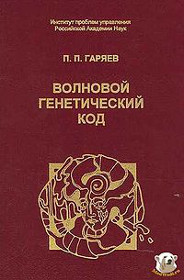 “Wave genetic code” was written three years after the publication of the monograph “Wave genome” and, Despite the similarity of names, does not repeat its, but develops mainly in theoretical terms.
In biology and, especially, the key part of genetics, It is time to soul-searching. Probably, It will have an explosive character. so beloved by many in times of lysenkovŝiny words and notions of "gene" and "triplet genetic code", Finally, widely accepted, and like, Here everything is clear. but here's the paradox, This visibility of clarity has become an intellectual obstacle. However,, an avalanche of new experimental facts no longer fit into recognized and, yesterday, revolutionary ideas. These new facts are amazing, excite the imagination, beckon forth. Take, at least, the problem of "selfish" DNA, or strange neèkonomičnost′ preinformacionnyh RNA synthesis, or as if unnecessary intron-èkzonnuû breakdown of genes. And take the context of distant orientations when selecting amino acid in the synthesis of proteins or the phenomenon of laser and soliton radiation DNA. And this is only a small part of the "anomalous" phenomena in biology. The situation is especially interesting with its famous Vobl-hypothesis f. Crick, prâčuŝej for sounding idea seemingly random "rocking" (replacements) the third nucleotide in codon to confer resistance the main theoretical difficulty paradigm triplet code, its omonimičnost′. Encoding similar Doublets-homonyms should exactly mean (encode) a distinct amino acids, the Ribosome makes this exact and clear choice amnokisloty. But how? Genetics and molecular biology now can not answer this question, they have frozen in the phase of misunderstanding the rules of spelling, spelling "texts" of protein amino acid "letters".
In other words, the problem of the genetic code to revise. Yes and why he is a genetic? He protein. With regard to the genetic code, as a blueprint for building the entire biosystem, He dramatically different-geteromul′tipletnyj, Multivariate, participatory and, Finally, figuratively-wave.
This work does not claim to be the ultimate truth.. Its objective is more modest than, correctly put new issues. Response to them, can be, will find in the twenty-first century.
P.p. Gariaev Wave "genetic code", Publisher "IZDATTSENTR» 1997. ISBN 5-7816-0022-1